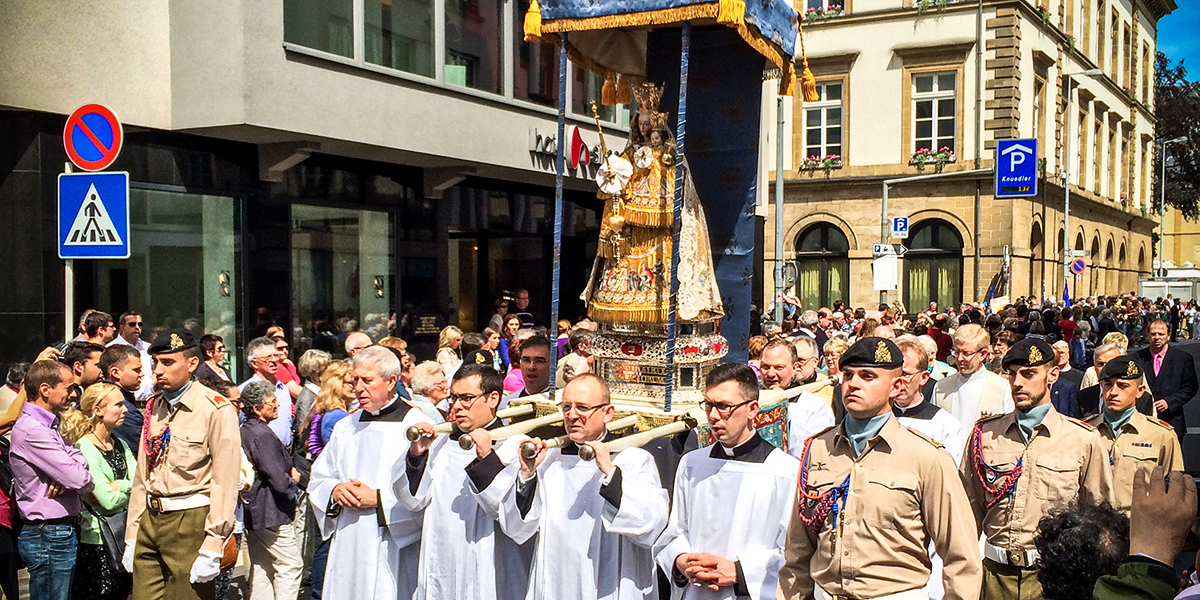 Learn about Luxembourg’s Octave festival and the traditions that take place during this 17th century festivity.

If you visit Luxembourg City this week, you’ll see a unique flag flying high over the city. It is the flag of the Octave! The Octave Festival has been a tradition in Luxembourg since 1666 and therefore predates the modern country. The Feast of the Octave pays tribute to Our Lady of Luxembourg, Mary, the Mother of God and Patron Saint of Luxembourg. Thousands of pilgrims make their way to Luxembourg City’s Cathedral each year during this 2 week pilgrimage.

Let’s take a look at this event that marks the largest religious tradition in Luxembourg each year.

What Is the Octave?

These people walk together over two weeks from their homes to the cathedral in Luxembourg City. There, they participate in a special mass and then after that a market, which is a bigger deal today.

The Meaning Behind It

The purpose of this pilgrimage is to honor and celebrate the patron saint of the country, Mary mother of Jesus. Known as the consoler of the afflicted, she stopped the plague that was raging in Luxembourg at the time centuries ago.

What’s interesting is that her role also adopted a patriotic meaning during WWII. Luxembourgers still recognize that importance today. The festival draws upon history and religion in an exciting way.

After their journey, the pilgrims arrive at the outskirts of the city. There, they form processions that go to the cathedral in prayer. During the following two weeks, the parishes and some organizations celebrate their masses.

The end of the Octave is marked by a final solemn procession. During this event, people carry the statue of Mary through the streets of the capital. In addition to the believers, representatives of the Grand Ducal Household, the government, the Chamber of Deputies, the judiciary, and other institutions of public life also join in.

Each year, there’s also a giant Octave flag flying in the middle of downtown Luxembourg. Normally, the flagpole has the biggest Luxembourg national flag that’s flying in the country. During this two-week period, starting April 24, it can be seen flying every day.

The Main Attractions of the Octave Festival

The “plus” of the event is undoubtedly the Oktavsmäertchen. This market was originally intended to allow pilgrims to eat and drink after mass. It also enabled them to buy various souvenirs and religious articles if they wished.

Over time, however, many more stalls were added. The “Mäertchen” became more or less a popular fair where beer and sausages dominate today. Typically, the Octave Market takes place from around May 10 to 25 on the Place Guillaume II and the Place de la Constitution.

News for Luxembourg Dual Citizens: When to Catch the Next Celebration

This tradition typically appeals to dual citizens who want to reconnect with the traditions of their ancestors. And the good news is that they’ll hopefully have the opportunity to join the Octave pilgrimage starting next year.

Unfortunately, in 2021, the march and the market are both suspended due to pandemic restrictions. However, note that the Octave tradition itself is still occurring. People will still mark the season as one of celebration and recognize the event in their own ways.