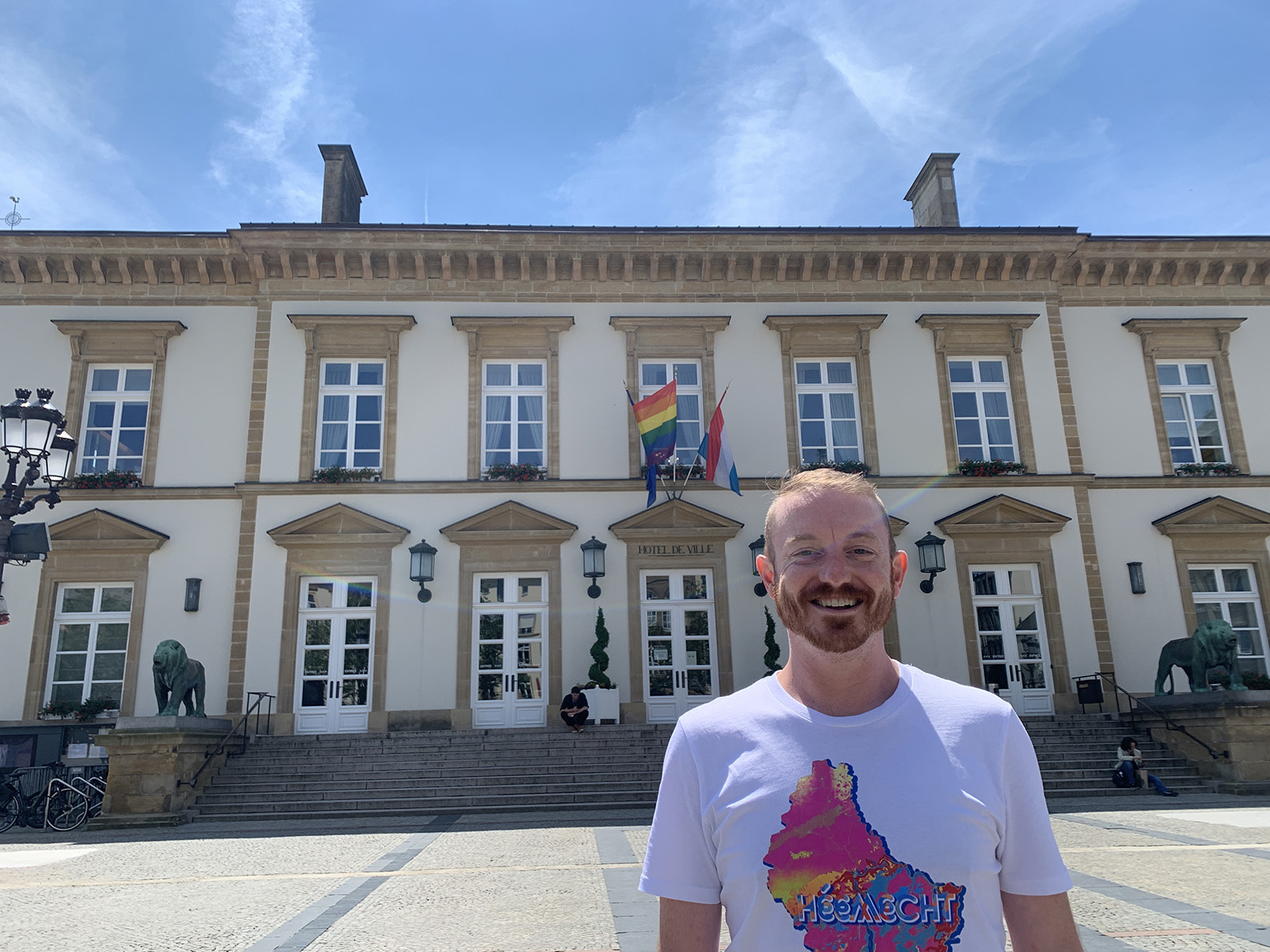 I Am A Gay American-Luxembourger

LuxCitizenship Founder Daniel Atz reflects on what it means to him to be an LGBT American-Luxembourger and LGBT rights in Luxembourg. 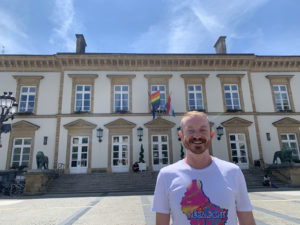 On December 4th, 2013, Xavier Bettel was named Prime Minister of Luxembourg. It just so happened that morning I booked my first ever flight to Luxembourg where I was planning to make my citizenship declaration. After booking, I checked the news in Luxembourg and I saw the announcement. What I saw, I’ll never forget. On that day, Xavier Bettel became the first gay man in a publicly disclosed relationship to take over as a leader of a national government. I want to emphasize, this was the first time in history and it was not even 10 years ago. I’m a bit embarrassed to admit it today, but the first thing I did thereafter was write him a letter of congratulations. But suffice to say, it meant a lot to me.

Growing up in Nebraska in the 90s and early 2000s, I did not have access to LGBT role models. In fact, I lived in a state that had the 46th worst record in the union on LGBT rights at the time of the Supreme Court’s ruling on gay marriage. Gay marriage where I grew up was out the question. Even basic recognition of LGBT people’s rights seemed taboo. My high school’s administration dismantled the Gay Straight Alliance the year I entered as a Freshman. These denials of basic dignity were harmful to many and detrimental to some. I had friends that could not bare the perceived shame that did not make it passed high school.

Although 2013 was many years later, finally seeing an openly gay man as a world leader was like a sense of relief to the young man inside me that still felt insecure about what it meant to be me. The fact that Xavier Bettel was the leader of my new second country was all the more personally significant to me. I also know that I am not the only one that felt that way. Going back home since then, I’ve met multiple gay men in Nebraska who have told me how much Xavier Bettel meant to them – even though they had no connection to Luxembourg. 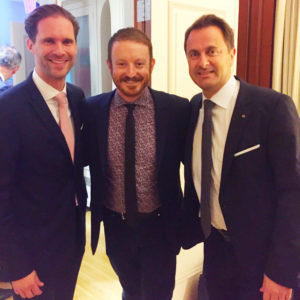 The Grand Duchy is generally speaking, one of the most LGBT friendly countries in the world. Luxembourg is ranked third in the European Union for LGBT rights protections and reports of anti-LGBT violence are rare. Civil unions – called PACS – have been open to same-sex couples since 2004. In 2015, the Chamber of Deputies passed by an overwhelming majority a law enabling same-sex marriage and adoption rights. Discrimination on the basis of sexual orientation and “change of sex” is outlawed when it comes in employment, healthcare and the provision of goods. Since 2019, transgender people are allowed to change their legal gender on the basis of self-determination.

And these rights do not just sit in paper. There are multiple out LGBT people who are important members of Luxembourgish society. Xavier Bettel married his husband Belgian architect Gauthier Destenay soon after the same-sex marriage law passed in 2015, saying he hoped “everyone in the world could be as happy as he was” that day. The former Deputy Prime Minister Etienne Schneider (2013-2020) is also openly gay and married his husband Jérôme Domange in 2016. One of Luxembourg’s deputies in the European Parliament Marc Angel is also openly gay and co-chair of the European Parliament’s LGBTI Intergroup. The Ministry of Family, Integration and the Grand Region recently ran a campaign highlighting what they call Luxembourg’s rainbow families.

How Being LGBT Affects My Dual Citizenship

Over the years and as my attachment to Luxembourg & my Luxembourgish identity has become more substantial, so has my understanding of what it means to be an LGBT person in Luxembourg. When I met my long lost family in Luxembourg, I was nervous to reveal to my Luxembourgish great-grandmother’s niece Annette that I had a male partner. She was in her 80s, and I wasn’t sure what to think. When I told her daughters, they seemed stunned that I would be nervous. As Prime Minister Bettel puts it, increasingly in Luxembourg “people do not consider the fact of whether someone is gay or not”. My experience is that this is true. Having lived in Luxembourg for some time now what I can say is this, there might be only one gay bar in the whole country but Luxembourg is definitely a very gay friendly country. You see same-sex couples comfortably walking around Luxembourg City hand in hand and being affectionate, which is not always a given in every country in the world.

There are some areas where I believe LGBT rights in Luxembourg can be improved. There is no law in Luxembourg banning conversion therapy. Also, surrogacy for gay male couples remains illegal. In fact, this really affects Americans recovering Luxembourg dual citizenship. A gay male American couple where one partner recovered Luxembourgish citizenship had two children through surrogacy in California. The Luxembourgish government granted citizenship to the citizen’s biological child, but not his non-biological child (each father had one biological child). They sued in Administrative Court and in 2019 the court ruled against the Luxembourgish Government. The Ministry of Justice informed LuxCitizenship in August 2020 that all ancestry citizenship applicants with adopted children now have to go through an exequatur to obtain citizenship for the children. We believe this was motivated by the court decision. Finally, there is an ongoing debate in parliament about a new adoption law and there has been some loud public discourse which has taken a homophobic tone, to the disappointment of many in Luxembourgish society.

LGBT Rights: Luxembourg and the World 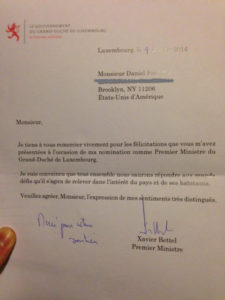 I will close this post personally by saying I am not the biggest Pride Month guy out there. I never expected to be writing an article like this. But there is no more important time than now. In over 70 countries in the world, same-sex relationships and even being an LGBT person can be against the law and even carries the death penalty. This is unacceptable and must change. Even in Europe, Hungary is attempting to pass legislation that equates homosexuality with pedophilia and bans communicating about LGBT people to minors. This law is a slippery slope and risks to have severe negative consequences for LGBT people in the country. We can be proud that Luxembourg as a country and our Prime Minister Xavier Bettel are some of the most vocal opponents of this law in Europe working to prevent the despicable bill’s passing.

Along with myself, several members of the LuxCitizenship team self-identify as part of the LGBT community and the others all certainly allies. Diversity is what has made our team unique and strong. We have many members of the LGBT community among our client base of 850+ (future) dual citizens and we want everyone to know that they are welcome with us. We are also aware of the unique issues LGBT individuals and families can face in international law and immigration situations. We are happy to share our personal experiences. Please don’t hesitate to personally contact me on this subject, whether a LuxCitizenship client or not.